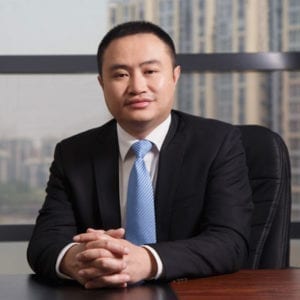 As CEO and Executive Chairman of GreenNovo, Ma Liyang is leading the company that is reclaiming the world in the harmless treatment and resource utilization of heavy-metal contained solid wastes generated by the metallurgical and chemical industries into the 21st century, hoping to make the world a better place through its own efforts.  He has been GreenNovo’s CEO since 2011 and became its Chairman and CEO in 2015. Through the years, his vision for the company has remained unchanged.

He graduated from Tsinghua University, one of the best universities in China. He holds two bachelor degrees from this university, one in business management and the other in automobile engineering, and a master degree in automotive engineering industrial. CEO Ma believes we all should be lifelong learners, and even with his current duties of chairman and CEO with GreenNovo, he still is working towards his doctorate in business administration from the Joint Program between Temple University, U.S.A. and Tsinghua University, China.

“I believe the purpose of GreenNovo is to make people’s lives better, not just ours, but many generations to follow,” he always says. “That is how we operated in the past, and it is how we will become even more efficient in what we do in the future, in our efforts to leave our mother earth better for our grandchildren than it is for us today… and not just in Asia, but globally”.

Under the leadership of Ma Liyang, GreenNovo’s core technology has been promoted as “Advanced Applicable Technology” by the Ministry of Industry & Technology Information and the Ministry of Environmental Protection, and has been listed as “Model Project for Heavy Metal Pollution Control of BFD” and is listed as “A key demonstration project to support the coordinated development of industrial resources in Beijing, Tianjin, Hebei, and surrounding areas”. In 2018, the Ministry of Industry & Technology Information listed GreenNovo’s Gejiu Hydrometallurgical factory as a “Nation-Level Green Factory”. And for himself, Ma Liyang won the honor of “Yunnan’s Outstanding Contribution Award for Industrial Development” In 2017.

“The ongoing success of GreenNovo is my, and my teams, life’s work,” he says.  “Nothing is more important to me than our reputation as a family company that people trust to do the right thing for our earth, our employees, our customers, and our children to follow us.”

As head of Business Strategy for GreenNovo, CEO Ma has led the charge to get certified in ISO9001, ISO14001, ISO28001 international standardization certification, and develop technology that has brought GreenNovo into the proprietary 7th generation of technology and machinery in our “Pyrometallurgical Enrichment and Hydrometallurgical Separation Integrated with Multi-segment Coupling”. GreenNovo owns 7 factories and its annual processing capacity is more than 1.2 million tons of heavy-metals contained solid wastes.

A lifelong environmentalist, Ma Liyang is committed to reclaiming products that benefit customers and society. Under his leadership, GreenNovo has worked with, and continues to work with, the Chinese government to establish the best emission practices that are used across Asia. His first corporate citizenship report outlining the economic, environmental, and social impact of company products and operations around the world was sent out in 2012, in which he impressed upon not just GreenNovo, but all companies globally, to do the right thing for our future generations in reclamation projects, eliminate landfilling, and to continue to invest in technology to do a better job in doing so.

“During the last recession and when the price of Zinc bottomed, GreenNovo continued to invest heavily in local infrastructure economy and technology at a time when many others were pulling back,” he says. “It absolutely was the right thing to do.”

In 2015, GreenNovo has achieved an overwhelming industry position in China’s heavy metal-containing solid waste treatment industry. At this time, he began to further think about the company’s prospects, how to expand into new areas, how to develop new technologies, how to make our work safer, and easier to protect and improve the environment. In 2016, the company announced its “global strategy”. GreenNovo began to seek opportunities to expand the global market and export technology and services to other countries. At present, it has achieved many achievements in Southeast Asia, North America and South America.

Not only that, in the area where GreenNovo is located, Chairman Ma and GreenNovo have made unremitting efforts in charity, volunteering, and social responsibility. He contributed capital himself, and GreenNovo also funded books, computers, clothing and other subsidies for schools in poverty-stricken areas, repairing the dangerous houses, providing medical station equipment, and so on. Under his leadership, the company’s management team also joined in funding orphanages, helping poor farmers to increase the sales of rice and other farm products, and helping the farmers obtain long-term means of earning a living and achieving long-term poverty alleviation.

“Our company has a history of 18 years, including Mr. Wang Shukai, the inventor of the core technology, every one of us has been fighting for the vision of eliminating heavy metal pollution for many years. We have achieved a lot. Both in scale and  technology, GreenNovo has become a global leader and have developed many industry standards, but we still have to do more to help the world understand what we are doing so that everyone can understand what Benefits the resource utilization can bring to the world and mankind”,  says Mr. Ma., “Our team members are working passionately, because this is a cause that benefits the country and the people, and we will continue to innovate, using advanced technology and new business models to achieve recycling heavy metals from industrial wastes and ensuring its safety in a densely populated world.”

Innovation for a Green Future